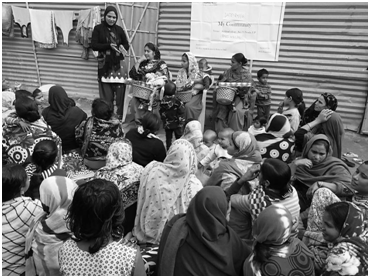 Many women in the community avoid going for vaccinations because of the misconceptions in their minds about injections and the after-effects. Mohsina is one of these women. She is sharing her story here.

One day a field staff came to my house. She told that they are working in the community on issues related to health and well-being, and asked me if I have some time on hand to talk. On responding in affirmative, she told me she wanted to discuss about my pregnancy. At that time I was six months pregnant but I was uncomfortable in talking to a stranger about the same. The worker was really friendly and built a really comfortable environment. Thus, I agreed to continue the conversation.

During the conversation, she asked me about various things, including some questions about my previous pregnancy. When she asked if I had been vaccinated during my pregnancies, I told her how afraid I was of injections. I had always been scared of needles and could never stand them. It was a popular opinion that the vaccination may cause fever and unease. I did not understand why people take these injections if they could make one ill.

After I had expressed my fear, the community worker asked me to come for a community session on vaccination being organised nearby. I was reluctant at first, but agreed when she insisted that it was for my own well-being and I decided to see what the session was about. Most women in the community are housewives and therefore sparing some time for the session was not impossible.

Through the session I got to know many new things about vaccination which changed my perception entirely. During the session, we were told about various diseases that could be prevented through vaccination and the risks of not getting vaccinated at the right time with a special emphasis on immunization needed for pregnant women, they told us how these could benefit both mother and child.

After the session, most women were convinced to get vaccinated, including me. I approached the field worker after the session and asked her if there was anything else I should be taking care of. She asked me to visit Barola PHC for tests and screenings. I took various tests including blood and urine tests to check my health status and received many facilities which I earlier did not know about. Following this I decided that I will get the delivery done at the government hospital. The delivery happened very smoothly and I did not face any problems. Since then, I have recommended many women in the community to go for immunization and institutional delivery.