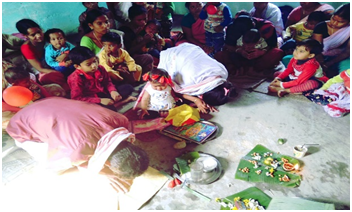 Naren Deka and his wife Dipti Dekalived in village Kabikara. Theirs was a happy middle class family.They had six-month old son named Marchi Deka whose Annaprason was planned to be celebrated in the ninth month in accordance with traditional practice. Annaprason is a ritual commonly celebrated to initiate complementary feeding in the ninth month of a child.

When Marchi turned six months, old the local Anganwadi worker along with the ANM visited their home and requested them to celebrate Annaprasonin the same month. Butthe parents refused saying that it is being celebrated at the age of ninth month of child as per tradition and it would be injustice to the child to feed anna (rice) before ninth month. The Anganwadi worker and the ANM tried their best to convince them that it was the proper time to initiate complementary feeding to the child along with breastfeeding but all was in vain. The parents stuck to their opinion that it was tradition to celebrate Annaprasononly in the ninth month.

The Anganwadi worker and ANM then decided to approach MAMTA as they knew that the organisation has good rapport with the community and the staff had the skills of communicating with the community and its stakeholders. At MAMTA they met Khirada Deka, the field coordinator of Dahi and shared their concern regarding delay of Annaprason of Marchi. It was decided that all three of them will visit the Deka family together.

Some days later they visited the parent of Marchi. There field coordinator explained the nutritional need of a child after six months of age. She also explained how the child might suffer if adequate iron and other balanced complementary food was not provided in time. The field coordinator said that some traditional rituals have to be adapted as per today’s need and the primary objective of it is to help the child to grow and develop in a proper way. “For the sake of the Marchi’s future, you should think and understand how to adapt the traditional system”, the field coordinator added and requested them to celebrate Annaprason in sixth month and start complementary feeding.

After the conversation, the parents of Marchi had a discussion among themselves and to the delight of everyone they declared that they will observe Annaprasonas suggested. The parents then requested them to fix a date for same.Marchi’s father admitted that he did not even know the fact behind celebrating Annaprason at the right age till it was explained by the field coordinator of MAMTA and also resolved that now onwards he will do his level best to orient other parents to celebrate their child’s annaprason in sixth month of age. Marchi’s mother Dipti Deka said, “From today, I am one of volunteer of MAMTA and will spread its messages among the community for the betterment of my village, my society”.